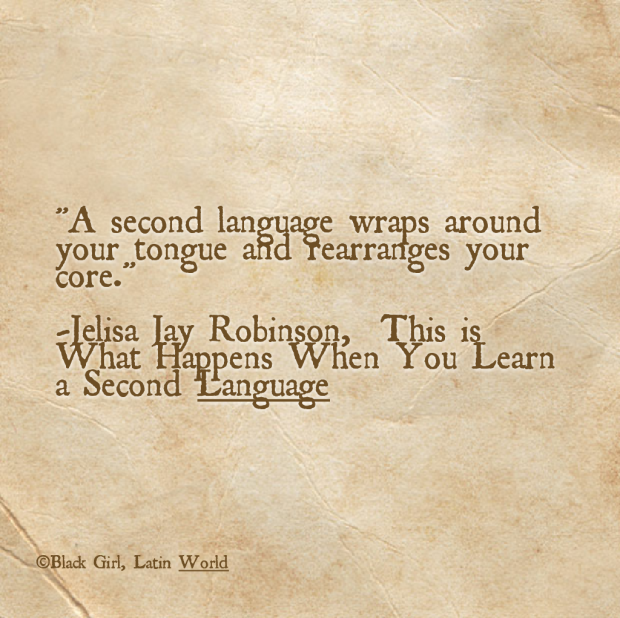 Sometimes your second language runs away from your lips like water from a faucet.  Your mind can’t even catch up with your tongue but your alma knows what you are saying.  You don’t even have to translate in your head because you understand intuitively. It’s magical.  That feeling that leaves you on a language high all day.  You want to use your new words with anyone and everyone who will listen.

A second language wraps around your tongue and rearranges your core.  All of a sudden you mismatch words and displace accents.  Everyone takes notice of how to you a “store” is no longer a store but a “tienda”.  Love is not “love”; it is amor.  Even the way you pronouce English words like “economic” have changed because the Spanish phonetic way has taken over your native tongue.  It enters your ears and your minds processes and decodes it at lightening speed.  Before you know it, la otra lengua has already become apart of you.

Are you fluent? They always ask you.  You answer “Si” and begin to follow up with a “pero” but something stops you.  What exactly does fluent mean? Are you able to talk vibrantly about football or astrophysics in your choosen tongue? Probably not. But then again,you aren’t good at talking about those things in English either.

You can, however, translate a Los Rakas jam, buy your weekly comida and tell your lover que estas en amorado.  If you were dropped off in a Spanish-language country, you‘d survive.  Are you fluent? You‘re fluent enough.  Fluent enough to state your bilingual ability on job applications and translate for your parents in the store. You are competent. You spit the slang, know all the transtitional terms and adjectives.  You switch accents because yours is a mixture of your Mexican American bestie, the Cubana at work and your Panamanian bae.  Your brand of Spanish is unique.

You choose this life or maybe it choose you.  Even though it gets hard, you are grateful to have the language in your back pocket or your front pocket or wherever.

So read books. No, read libros en la lengua de tu alma. Because more often then not you will find that the characters will speak toyou.  You will learn from the ways that authors twist their words and make scenarios come alive that creatividad is universal.

Talk to others. Whether native or second or third language learners. Get lost in their stories and share your own.  Tell them about the time you forgot the word that looks like embarrassed was actually the word pregnant in front of your baes parents.  Swap stories about having to whip out the bilingualness after getting lost during study abroad trips or trips to new parts of your hometown. Let them know why you fell in love with it in the first place.

Learn the history of your new language.   Understand that people were ridiculed for speaking it at one point and that people are still being discriminated against for speaking the language you have chosen to speak.  Learning another language is a privilege especially when it’s a pastime.  Never seek to be the voice for the community whose language you take part in but rather be an ally.

Lastly, listen with your heart.  It is easy to get caught up with grammar rules, verbs conjugations but most wonderful part of language learning and speaking is the way your mouth works to form new works.  Embrace that.

Let it be the road map to new places.  Let your second language open up dialogue and oportunidades. Let it run like a faucet and don’t be afraid of moments when you can’t think of the word. Nelson Mandela said, “If you talk to a man in a language he understands, that goes to his head. If you talk to him in his own language, that goes to his heart.❞Now, you have two languages in your heart.  This is what happens when you learn a second language.